Allows for a space filled with natural light and, at the same time, bespoke privacy. 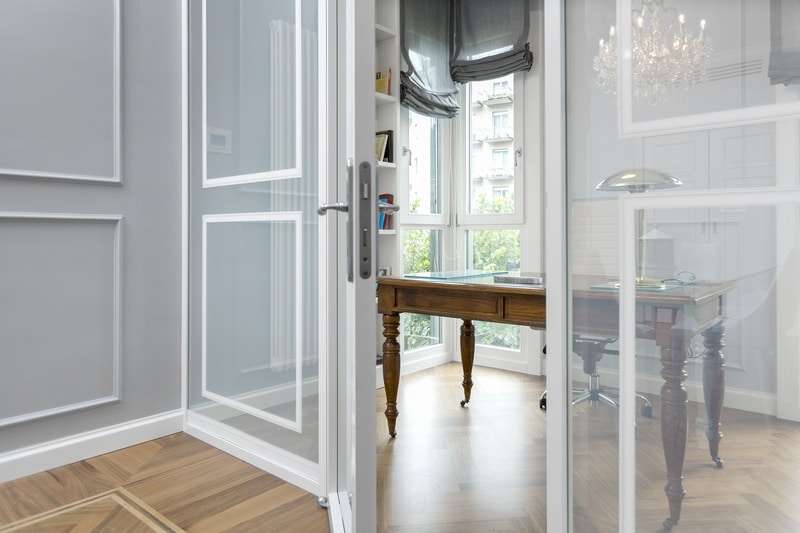 Smart film PDLC, capable of making glass intelligent, is proving to be a trendy comfort in the world of architecture and interior design.
Its applications, which are almost infinite, can be used in a variety of environments and spaces: glass partitions, French windows and doors, commercial shop windows, trade fair windows, showers, spa environments and much more (to see some application examples click here).
Our homes, as well as our offices, are often open-plan environments with multi-functional spaces and no partition walls, which lack privacy and intimacy.
The PDLC smart film can help architects and designers to convert open-plan spaces into spaces where privacy can be maintained: by applying smart films to glass partition walls and transparent glass doors, it is possible to create a visually open and spacious environment by setting the status ON (i.e. during the transparency phase of the film) and to create a perimeter, comfortable and bright environment by setting the status OFF (i.e. during the translucency phase of the film).

Smart working, which is as much in vogue as it is needed in this time of health emergency, is a perfect example of the need for quiet privacy even in the home. Innoptec's electro-optic film applied to glass partition walls makes it possible to create a completely private, soundproof and at the same time bright office even in an open-plan environment at the touch of a switch.

Do you have an upcoming project? Contact an Innoptec expert.

... and smart living is your passion?
Enter your reserved area to discover how Innoptec can make even the windows in your home smart >