Testing to develop electro-optical liquid crystal films has been carried out on an international scale over the past 30 years. 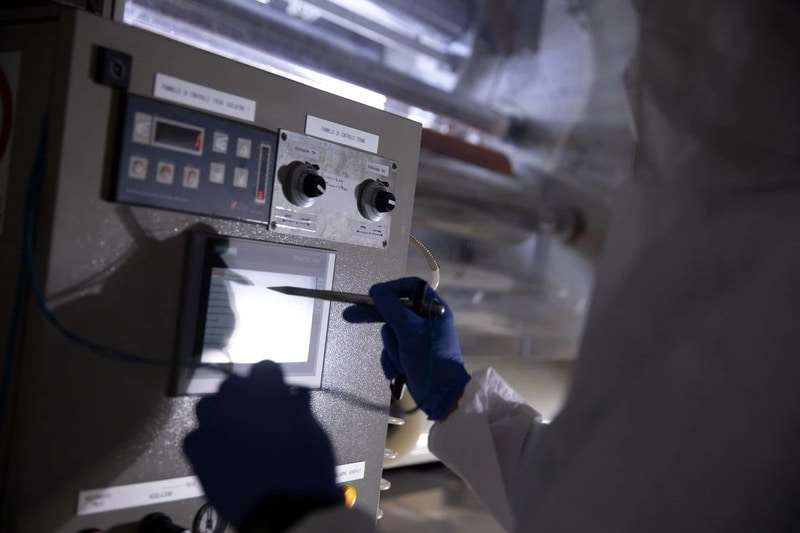 Thanks to the stabilisation of the liquid crystal in a polymer matrix and the use of continuous lamination production processes, these technologies - generically called “Polymer Dispersed Liquid Crystals” (PDLC) lend themselves to applications of liquid crystals in devices having a larger surface and in the form of flexible films. The benchmarks of the basic technology that Innoptec® Srl has developed in Italy at the industrial and trade level starting from the year 2000 are presented in this section.

What Liquid Crystals are
As a general rule, the materials used in the “Liquid Crystal Display” (LCD) and in the PDLC are organic substances with a rigid molecular structure and elongated shape.  The basic characteristic distinguishing the liquid-crystal state consists of the fact that the molecules tend to orient themselves parallel with each other with respect to the long axis, although behaving as a fluid at macroscopic level, presenting an intrinsic order falling intermediately between the crystal state (three-dimensional order) and the liquid state (no order, total isotropy). See figure-1 for a simple demonstration of the liquid crystal behaviour.

The anisotrophy of the molecular structure is at the origin of the anisotrophy of the molecular interactions (nanometric scale) that is transmitted at the macromolecular level (micrometric scale), with the creation of a series of interesting effects such as birefringence or the possibility to align the molecules with external electromagnetic fields of even weak intensity, or exploiting the surface interactions (interactions of the liquid crystal molecules with the surfaces of appropriately treated materials).

What a PDLC is
During the first half of the 80s, in the USA the industrial research owed to the inventiveness of  James L Fergason (150 patents) and the academic research at Kent State University and in Italy at the University of Calabria led to the common conclusion that in order to get past the existing problems associated with the production of conventional low-cost LCD systems and to extend the thin film technology applications, liquid crystals (LC) can be contained (stabilised) by a polymer matrix.  The results of this research, presented in patents and publications, assign the stabilised systems the general name of PDLC.

Generally, the stabilised systems cover a vast range of compositions between liquid crystal and polymer.  The compositions with a low LC content (up to about 30%) are monophasic, while those with a higher content (between approx. 30% and 80%) are biphasic. These latter are the microstructures that lend themselves to practical electronic applications.  A preliminary outline is shown in figure-2.

So, the phase separation between the two components takes place in a mixture with about 30 to 70% liquid crystal, with the formation of a “discontinuous” phase dispersion of microscopic droplets of liquid crystal in the “continuous” phase of the polymer matrix. The shapes, dimensions and distribution of the microscopic droplets depend on many physical-chemical parameters and on the phase separation process used. Figure-3 shows the structure, morphology and electro-optical functioning of a classic PDLC compound. 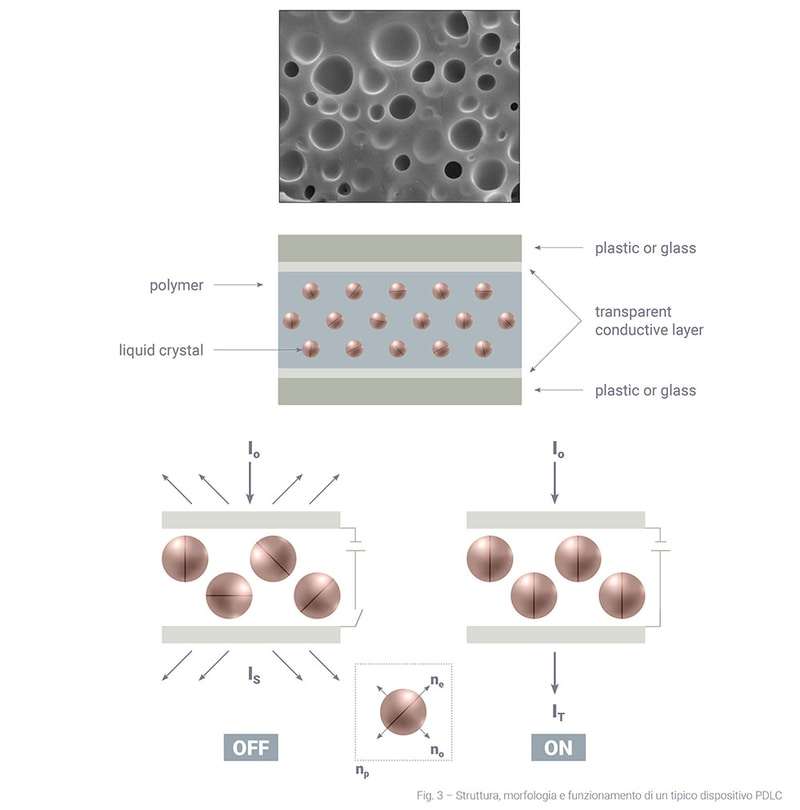 In the OFF state, the micro-droplets of LC have a random orientation, causing the light inside the PDLC film to disperse, so it appears opaque. The electro-optical performance of a PDLC is highlighted when subjecting the film to an increasing potential difference ΔV in alternating current; when ΔV reaches a certain threshold value of about 60 volts (ON state), the film becomes transparent due to the effect of the LC orientation in the direction of the electric field, with a consequent approaching or coincidence of the refraction indices of the LC and polymer. The applied voltage is usually provided by alternating current (50-1000 Hz).

Usually the response times of PDLC, both to the rise time and to the decay time, vary between 10 and 50 milliseconds. These electro-optical parameters of a PDLC are summarised in figure-4.

Materials used in PDLC
In this section, we are presenting a brief overview of the structures and types of materials and media used to make PDLC devices with phase separation-based methods. A wide assortment of liquid crystals, pre-polymers, binders and conductive media are found on the market. The choice of materials may significantly affect the final morphology, as much as the preparation technique used.

> Liquid Crystals
The biggest problems encountered in developing these materials are represented not only by their stability (moisture, temperature, ultraviolet radiation) but also by the fact that to properly operate a device these compounds must present specific and certain values for parameters, such as electro-optical response, viscosity, purity, and others.
Since the sum total of all these properties is hard to find in a single compound, mixtures containing from 4 up to 10 different mesogenic components are normally used in both traditional and PDLC devices.
The right choice of the type of liquid crystals to use in any case decisively depends also on factors such as solubility in the polymer phase, the phase separation technique planned to be used, and the final performance demanded of the device.

> The polymer matrix
The solid matrix of PDLC devices is obtained by polymerisation of a monomer, a oligomer or a pre-polymer (PIPS) by evaporation of a solvent (SIPS) or by cooling a polymer/crystal liquid mixture (TIPS). In the PIPS method, the polymerisation kinetics are governed by both radical reactions (UV-PIPS) and stages (TS-PIPS). Synthetic resins available on the market, such as epoxy, vinyl, acrylic, polyurethane and many more, are used for these purposes.
We must also bear in mind that the properties of the polymer matrix, such as index and refraction, the dielectric constant, and the mechanical properties, are decisive for the formation and performance of the devices. Generally speaking, the polymers used are classified according to the preparation method as thermosetting, UV curable and thermoplastic.

> Conductive Media
PDLC films are prepared on glass or plastic substrates covered with a thin conductive film, usually 300-500 nm, of indium tin oxide (ITO) deposited by sputtering. The chief advantage of ITO compared to other metallic coatings lies in its transparency and its chemical stability. The type and characteristics of the coating and medium depend on the use for which the electro-optical device is designed. The ITO-glass systems are mostly used in displays and for preparing laboratory samples with centimetric dimensions, while the ITO-plastic systems (mainly PET, polyethylene terephthalate) are mostly used for industrial preparation, with roll-to-roll systems, of windows and displays several square metres large. The differences in optical, thermal or mechanical behaviour between the glass and the plastic media naturally end up affecting the final performance of the device.

The applications for this film are many, click HERE to learn more.